Dates of ordination as deacon, priest and bishop

I was born and raised in the small town of Port Elgin in South Eastern New Brunswick in 1959. Like most small, rural maritime communities, we thrived on our relationships and our community organizations drew us together. The Church was one of those deeply formative places for me. It was a place of warmth, joy and acceptance and the clergy and people were luminous figures in my life.

The call to ministry came early to me. As I began my undergraduate degree at Mount Allison University, I also found myself before a committee to consider my sense of call and vocation. Suffice it to say that I got a serious case of cold feet and came to the conclusion, at the ripe old age of 17, that this was not for me. The deal I made with God was that I would devote my life to public service.

After switching my major to political science and history, at age 18, I stood for election to the Village Council in my hometown. It turned out that I became the youngest New Brunswick citizen to hold elected public office. I loved the work that I was able to do for my community. This led to me becoming involved in party politics and standing (unsuccessfully) for nominations provincially (1982) and federally (1988). I had the opportunity to meet and learn from community leaders possessed with a deep conviction to make a difference within their communities, the country and the world.

During these years, I was blessed with the adventure of a lifetime when Jeanie and I were married. Part of that adventure was raising three wonderful children, Thomas, Sarah and Charles. Jeanie’s death this year left a huge hole in our lives that, thankfully, is being filled with beautiful memories from those years, along with the prayers, love and support of many people.

Following graduation from the University of New Brunswick Law School, I practised as a member of the Bars of New Brunswick and Nova Scotia until 1989. Once more the Spirit began to tap me on the shoulder with intimations that the call to ministry needed considering again. Faith in action, rooted in discipleship, upon the firm foundation of the Gospel is the most concise way that I can describe the manner in which the Spirit’s call presented itself that second time.

Frederick Buchner wrote that “your calling is found where your greatest joy meets the world’s deepest need.” My greatest joy continues to be identifying and addressing needs within the communities I have been called to serve and building and working together with teams to address those needs. Working with the energy and commitment of followers of Jesus Christ has been deeply satisfying, whether chairing the board of directors of a project to build an Enriched Residential Seniors Care Facility in Western PEI, expansion and redevelopment of a Parish Church in Kingston, the Ministry of Reconciliation, ecumenical & interfaith work or partnering with community members to create a fund in support of students in Pakistan following the terrorist attacks in 2014.

Serving the Church in episcopal ministry for the past eight years has been an immense blessing, primarily because I have the joy of supporting communities that are places of warmth, joy and acceptance or supporting them as they grow toward that goal. Building relationships, together with leaders on the national and international stage, has carried that Gospel mandate from the local to global mission of our Church. For that, I have been blessed and deeply thankful.

Statement on The Primacy

Primacy is all about first things. The phrase “In the beginning” launches both the Hebrew Scriptures and the Gospel into telling the divine story as God creates and recreates. The ministry of the Primate has, at its heart, the Spirit’s call for the Church to focus upon the One who moved over the face of the deep in the beginning and who breathed life into the Church at Pentecost, sending this united body of believers into the world with a mission.

The power of the Primacy is the voice of the Primacy. The voice of Primacy calls us back to the first principles of our faith, placing the law of love at the center of our common life. We live in the midst of challenging times but always within challenge lies opportunity. The Church has never been more poignantly placed to find common ground than by insisting that we seek the path toward higher ground. The deafening voices of bitterness, division and fear seem to be in continual ascendancy, making it vital for the Church to rededicate itself to the mission that inspired the early followers of Jesus. We are so much stronger, so much more effective when we draw together to serve together.

The Primate is called upon to proclaim the Good News of Jesus from the strength of renewed relationships. The more complicated, divisive and toxic our world has become, the more vital it is that the heart and spirit of the laity, clergy and every mission across Canada, including well beyond our borders, be inspired to mirror the sacrificial love of Jesus for the world. Our Church is called to be a beacon of hope, bearing a message of unity in the Name of Christ.

The power and authority of the Primate is not that which resides in the power structures of the world. It is not “something to be grasped” but grows from the building of relationships, walking with the beloved of God and listening to the yearning of their hearts. It is best summed up in the phrase “together with” rather than “ruling over”.

The Primate serves as “first among equals” within the House of Bishops and within the Councils of the Church. There is a strong emphasis on leadership, teaching, prayer and pastoral care across the Church in Canada to which is added the voice that our Church is called to bring to the building up of our common witness to the ministry of Jesus Christ throughout the world.

Primacy lives within the context of the times in which we live. Our new Primate will not only stand on the shoulders of the thirteen faithful souls who have gone before but must build forward from their legacies. Moving forward from General Synod, our new Primate will be called upon to be a voice of healing, reconciliation and renewal within our Church, within our common life and in speaking with those in leadership in the country and world. It will require a caring heart, a strong will, a spirit of reconciliation and faith that the path ahead will be illuminated by the love of Christ.

The Anishinabec and Haudenasaunnee people of southeastern Ontario begin every gathering with these words: “we come together with good hearts and minds, with good intentions and expectations”. Indigenous wisdom holds many gifts. While we continue on the journey of reconciliation, seeking to renew relationships within the Church and the world, our new Primate will be called upon to gather us together in heart, mind and spirit. May the ministry we undertake together, in the strength of the Holy Spirit, bear fruit that will give life to the intentions and expectations best voiced in the prayer of Jesus that “they may be one, even as we are one”. 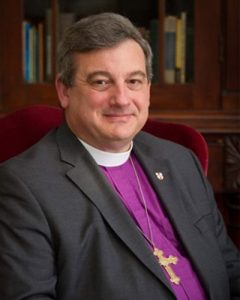